The USS Joshua Norton is a Defiant class refit, specifically modified for Starfleet Intelligence Covert Operations. She is named for the late 19th century earth figure, an eccentric of note in the San Francisco area.

She is 119.5m in length, 25.5m high, and has four decks. In her current configuration, her crew is 32 intelligence trained officers. She is equipped with a Quantum Slipstream drive, and is capable of Warp 9.5. She is equipped with deflector shields and ablative armor for defense. She is armed with four phaser cannons, three phaser emitters, four forward torpedo (photon and quantum torpedo) launchers, two aft torpedo launchers. She is equipped with three shuttle craft: The Turing is a normal sized shuttle, and the Hopper and Lovelace are shuttle pods. She has a standard cloaking device, as well as a holographic cloak.

The main bridge is probably the area least modified from the original design specifications of the defiant class. It had a command chair in the center, with two control panels on pedestals to either side. At the front is the conn/ops station in front of the main view screen, to port is the main tactical station and engineering station, and to starboard is the secondary tactical station and science station. 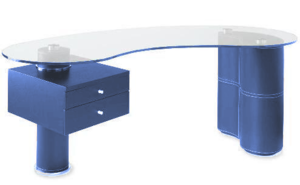 The captain's ready room has been customized heavily to match Amelia's tastes. The flooring is replicated bamboo tiles shaped like the tessellated lizards in the M C Escher lithograph Reptiles. She has a glass topped desk with two drawers. On the wall behind her desk is a painting that was created by her brother: it features four anthropomorphic turtles with shadows that looked like human Renaissance artists. Hanging on another wall is her cat o'nine tails whip; it is named Anne, after the daughter of her favorite Captain (now Admiral) Andrea Levine. Anne hangs on the wall as a nod to old Earth naval tradition of the whip being corporal punishment, and the name was selected in reference to the whip's common nick name being The Captain's Daughter.

As is everything on the ship, the mess hall is modified from the stock Defiant's specifications to help improve the comfort of the crew on long deployment. To that end, a small island kitchenette has been installed to allow for some fresh food preparation, and the tables have been upgraded to a circular space saving design with chairs that fit snug under when not in use.

The island is designed to maximize space and utility within a confined space, and can rotate and adjust height to suit the needs of the person using it. The circular work space is divided between a cook surface, a sink, and an open counter space. Under there are a number of compartments for storage (temperature controlled and not), as well as cleaning and sanitation. Above there is a ventilation hood with more storage compartments, lighting, and cleaning and sanitation tools for the work surface.